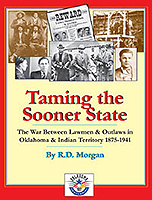 Oklahoma is a state rich in lawmen and outlaw history, truly the last bastion of the “Old West.” The state has a tradition of banditry dating back to the time of the Indian Territory. The following account presents a collection of rare photographs, biographical sketches, and true stories offered in chronological order dealing with the epic battle between the forces of law and order and wrongdoers taking place in a geographic area encompassing the modern state of Oklahoma.

This narrative, which represents nearly ten years of research, is presented in two-part form within a single volume. Part I covers the period of 1875-1919, chronicling events taken from the Indian and Oklahoma Territories to statehood and beyond, while Part II covers the period 1920-1941. This work does not represent an attempt to tell a complete history of lawmen and outlaws in Oklahoma. It is merely offered as a series of prime examples of the genre.

To entertain the notion that the Sooner State was actually tame by 1940 is certainly not the point of the book. The efforts made by many brave and dedicated men are what bear the telling of the story. As usual, R.D. Morgan does his usual masterful job of research. With the help of his wife and research partner, he brings out small bits of factual detail that other authors have overlooked.

R. D. Morgan has written six books concerning Oklahoma lawmen and outlaw history including The Bad Boys of the Cookson Hills and The Tri State Terror: The Life and Crimes of Wilbur Underhill. He has also penned dozens of articles for historical journals, magazines, and newspapers on the subject. Morgan was recently engaged as a historical consultant for the production of the documentary “Crime Wave” for the History Channel. He is currently working on his seventh book, Irish O’Malley and the Ozark Mountain Boys. The author, his wife, Naomi, and two faithful dogs reside in Haskell, Oklahoma.