Stillwater: A Cradle of Oklahoma History, By D. Earl Newsom 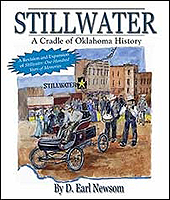 Although much has been written about Stillwater’s fascinating history, this volume may be of special interest because it not only records the past but it also captures the history-making events of the Centennial Year 2007 in clear aerial color photographs by Kenneth Helt. Not since the post- World War II years has the city experienced such a remarkable surge in population, business expansion and housing developments or seen the dramatic changes in its Main Street. These factors, plus pictures and text that show Stillwater’s role in early Oklahoma history, make this an important addition to each citizen’s personal library. Even those who see this volume in the distant future will be able to follow the story in text and pictures of Stillwater’s history from the time of the William L. Couch Boomer encampment of 1884 on Stillwater Creek through the history-making Centennial year and even to see a glimpse of the future.

Bibliography About the Author Index

A native of Drumright, OK, D. Earl Newsome is author of four other historical books, including Kicking Bird and the Birth of Oklahoma, Stillwater-One hundred Years of Memories, and two volumes on the great Drumright oil field. He is a graduate of Oklahoma State University and Northwestern University, Evanston, IL. He began his career as a newspaper reporter and editor and then taught journalism at Texas A&M College and the University of Maryland. He received numerous citations for academic and professional achievement. Earl passed away in 2013.