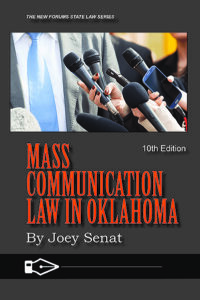 MASS COMMUNICATION LAW IN OKLAHOMA brings between two covers a valuable reference to state law affecting communication professionals and students. Written for the layperson, it examines issues that occur in daily news-gathering activities, such as libel, open records, and reporter privilege.

Media law is consistently evolving, and Oklahoma law is no exception. With timely updates covering this dynamic field, Mass Communication Law in Oklahoma will earn its place on every media professional’s desk.

Joey Senat is an associate professor at Oklahoma State University’s School of Media and Strategic Communications, where he teaches mass communication law and multimedia journalism courses. Dr. Senat writes an open government blog for Freedom of Information Oklahoma Inc. and is quoted frequently by national and statewide news outlets on FOI and media law issues. He has spoken on FOI, First Amendment, reporting techniques and journalism education issues at dozens of professional and academic conferences. Dr. Senat has served on the Board of Directors of FOI Oklahoma Inc. and as president of the statewide nonprofit organization. He also serves on the FOI Committee of the national Society of Professional Journalists. For his work to advance government transparency, Dr. Senat received the 2017 Ben Blackstock Award, 2007 Marian Opala First Amendment Award and the 2005 Oklahoma Society of Professional Journalists Award for Distinguished Service to the First Amendment. He has been named Outstanding Professor in OSU’s College of Arts and Sciences and received the Mortar Board Honor Society’s Golden Torch Award for the college. Prior to becoming a college professor, Dr. Senat was a reporter for The Commercial Appeal in Memphis, Tenn., and the Tulsa (Okla.) World. He earned a bachelor’s degree from Louisiana State University, a master’s from Memphis State University and a doctorate from the University of North Carolina at Chapel Hill.