Gunplay: The True Story of Pistol Pete on the Hootowl Trail, By Robby McMurtry 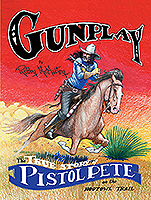 When OSU’s Pistol Pete mascot delights fans at sporting and other events, all of us like to cheer! Indeed, thousands of people– millions, perhaps–recognize Pistol Pete, official mascot not only for Oklahoma State University but for the University of New Mexico and Wyoming University as well. Far fewer people are aware that the image of the gun-toting cowboy is based on a real person, named Frank Eaton. Eaton’s biographers, interviews, and letters indicate that he came to Oklahoma (at that time the Indian Nations) as a child in the 1870s; he worked as a cowboy, wrangler, and US deputy marshal under Judge Isaac Parker. Eaton was originally motivated by revenge on the men who killed his father. He was dubbed Pistol Pete at Fort Gibson for his skills with a sidearm, and he spent several years tracking his father’s murderers from Missouri to New Mexico. Although most western historians dismiss Eaton’s exploits as tall tales, citing lack of documentation, many find his story convincing. And what a story it is! — a pragmatic yet romantic version of life in the old territories, a story of foul murder, fast friendships, true love, and final vengeance. Whatever the truth may be concerning Pistol Pete, his memoirs have been filtered through the mythology and history of the American West, and his image has been imprinted on the regional consciousness. In “Gunplay,” however, he is not the grizzled old cowboy seen in 20th Century photographs of Frank Eaton, but a young man, a product of his times, bent on fulfilling a vow to himself. Here, Eaton is driven by revenge, although he calls it justice, and he deals it out with Colt revolvers, with the blessing of the law. “This Pistol Pete,” says McMurtry, “can only be appeased by a certain measure of blood, and his story is difficult to reconcile with current notions of honor, faith, and even femininity.” As an old man, Eaton saw his image adopted by Oklahoma State University, replacing the tiger mascot. He gave interviews, dictated his autobiography, gave marksmanship demonstrations, and sold war bonds. Eaton passed away in 1958, claiming to be 97 years old.

Robby McMurtry is Irish, Cajun and Comanche descent. He was raised by coyotes near Loco, Oklahoma (ZIP CODE 73442). Today, he lives near Okmulgee, pretending to be a teacher, artist, man of letters, and cavalier, sharing his home with wife Lesa, grandson Jet, and assorted dogs and horses.