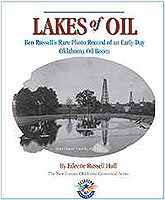 The Wheeler #1 in the Cushing-Drumright Field opened the largest oilfield in the world in 1912. Production was so staggering, storages could not contain the overflow. This forced the oil to seek its own level, creating “Lakes of Oil.”

Eileene Russell Huff offers the reader a tremendous gift through the work of her photographer father in this rare photo collection of the Drumright-Cushing oil field as it was developing from 1912 through 1918. It was said that this great field of 3,000 oil wells was instrumental to the allies winning of World War I. In addition to over 240 remarkable, never published photographs, Eileene richly captures life in a turn-of-the century Oklahoma boom town through her narrative –– as related by her father, Ben Russell. The stories and photographs of this volume will show the reader how people lived during these exciting, dangerous, and legendary times through conditions often unbelievable. It is a photographic memorial to an exciting segment of Oklahoma, and America, moving forward!

Eileene Russell Huff was born in a brown box house in Drumright. This had been her father’s first home and photo studio during the boom days. She attended Drumright schools and graduated from Drumright High School. A journalism student of Orville von Gulker, she went to work immediately after graduation at the Drumright Journal and was an editor before she was 20 years old. She attended the University of Oklahoma. She had a lifelong career in freelance writing, having been published in numerous magazines and metropolitan newspapers. Her series of newspaper articles, “Drumright’s Unique History” in the Drumright Gusher in 1995, was published in book form in 2004. This series was awarded first place in the “Distinguished Service Award for Preservation of State and Local History” in 1995 by the Oklahoma Heritage Association.