Once Upon a Highway: Route 66 in Oklahoma, By John Calvin Womack 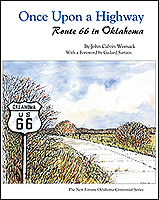 Artist and author John Calvin Womack faithfully captures over 155 sites along 395 miles of historic Route 66 in Oklahoma. Over a five-year period, John traveled the old stretches of Route 66 in Oklahoma compiling notes, sketches, and photographs of the various sights along the highway. This research developed into the series of pen and ink drawings presented in this collectors’ volume. He brings to the viewer and reader a remarkable and provocative record of sights and places –– scenes of gas stations, motel signs, churches, houses, barns, bridges, and many other structures that convey not only the aura and image of Route 66 but also the rich architectural heritage present in many of these Oklahoma communities. Thus, the volume is an important part of the historical and cultural record of both Route 66 and Oklahoma.

John Calvin Womack is a native of Springdale, Arkansas, where he graduated from high school in 1968. Earning a Bachelors of Architecture degree and a Bachelor of Arts degree from the University of Arkansas in 1973, John entered the office of architect Euine Fay Jones in Fayetteville, Arkansas, where he worked for the next ten years. During his time with Fay Jones he worked on many awardwinning projects, two of which were the acclaimed Thorncrown Chapel and the Roy Reed Residence, both winners of National Honor Awards by the American Institute of Architects. Starting his own architectural practice in 1983, John continued designing projects in the organic tradition of Fay Jones and Frank Lloyd Wright. One of his first residential designs appeared in About the Artist and Author Fine Homebuilding’s Special Issue on Houses in 1988. His drawings and renderings have won awards in both architectural and art circles and have been published in various publications worldwide. In 1987 John began teaching in the University of Arkansas’s School of Architecture as an adjunct professor. This exposure to teaching developed in him a passion for teaching and led to his obtaining a Masters of Architecture degree in 1994 from Oklahoma State University, which subsequently led to his joining the School of Architecture faculty at OSU in that same year. In the summer of 1994, John and his family moved from Fayetteville, Arkansas, to Stillwater, Oklahoma, where he continues to teach, draw, paint, and practice architecture.